Is Nicaragua Safe for Travel?

Is Nicaragua Safe for Travel?

*, Nicaragua, the lesser-known neighbor of tourist hotspots Costa Rica and Honduras, is an up and coming traveler’s gem. Lush jungles, active volcanoes, colonial cities, friendly locals, and secluded beaches offer a little something for everyone. Over the last decade, Nicaragua has finally made a name for itself on the traveler’s map but the country’s recent political unrest leaves many travelers wondering… is it a safe place to travel? 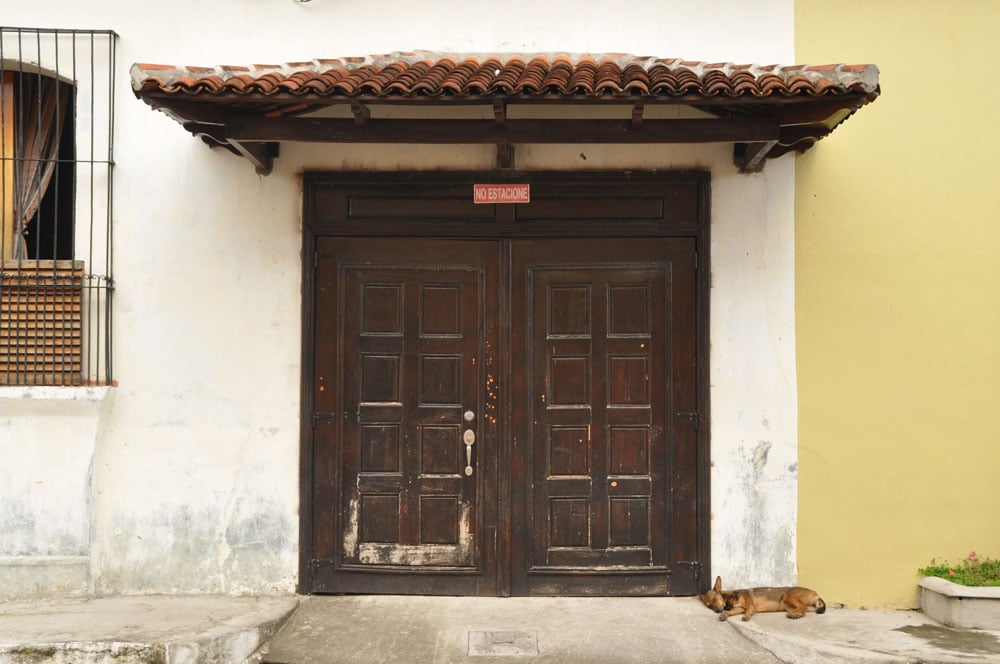 Compared to its heavily trafficked neighboring countries, Nicaragua has a far less violent crime rate. Although the country’s recent turmoil may make it seem unsafe in a lot of ways, it is a relatively safe place for tourism and travelers.

That being said, it is not without crime and has dealt with its own issues. Just like many other developing countries, being aware of the dangers and crime hotspots, knowing potential scams, and taking precautions to stay safe are all crucial insights to an enjoyable trip.

Here are the facts…

Nicaragua has had a tough political history with long reigns of dictatorship. In the 1980s, the Central American country had an intense civil war that took the lives of over 30 thousand Nicaraguans. Although it is still recovering from its turbulent past over 2 decades ago, it remains one of the safest countries in Central America.

In April 2018, protests started against social security reforms implemented by the government. The reforms increased taxes and decreased social security. These protests were instantly met with violent repression from authorities and from April 2018-February 2019, over 300 people were killed as a result.

Due to political and civil turmoil in the country, governments around the world have updated their travel advisories and recommended that tourists change their travel plans to avoid Nicaragua. This brought tourism to a halt in 2018 and many tourist-based businesses were closed for an extended period of time. 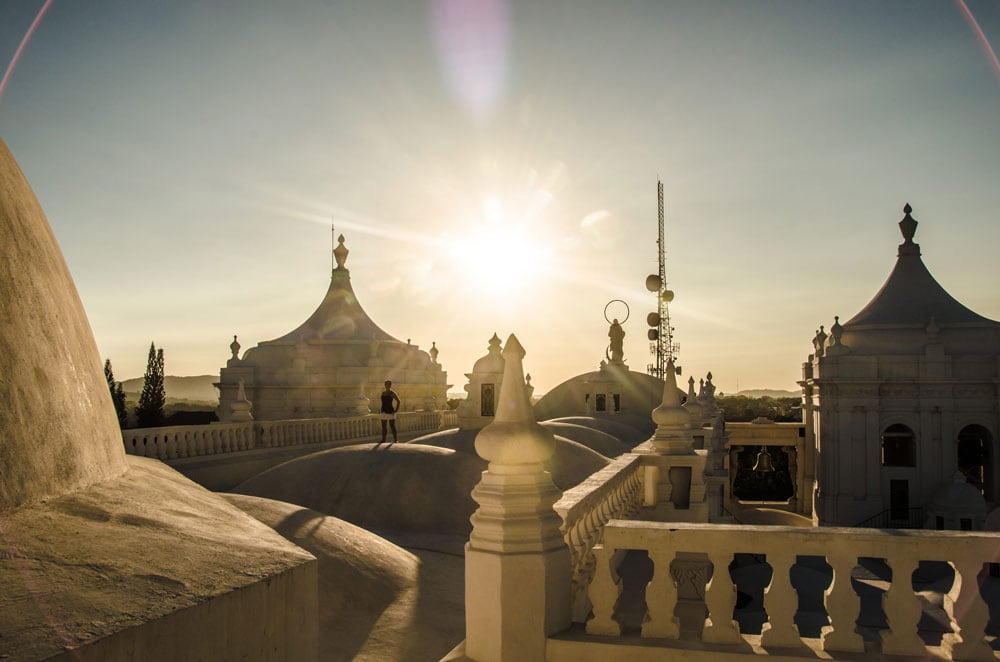 Since December 2018, civil unrest in the country has come to a halt and as a result of the gained stability, hotels and tourist areas started to reopen their doors. Since then, tourism has slowly returned and more people are catching on to visiting Nicaragua as a budget-friendly destination.

These days, protests have since ceased and the country has calmed down. Although not 100% stable, there is no serious threat to tourists. Being aware of the situation and staying out of political issues, protests, and gatherings should keep you out of harm’s way during your travels in the country.

Petty crimes such as robbery and theft are the most common offenses in Nicaragua. These usually take place in the capital of Managua and larger cities such as Granada, Rivas, and Leon.

As with many developing countries, pickpocketing is especially common in public areas. Bus stations, public transport, markets, and anywhere heavily trafficked are hotspots for pickpockets.

To avoid being a potential target, you should keep minimal cash on you. The money you do bring should be kept in a secure place such as a travel money belt. Try not to have anything bulging from your pockets- as it can make you an easy target. It’s also a good idea not to wear expensive clothing or flashy jewelry, as this will attract attention to yourself. 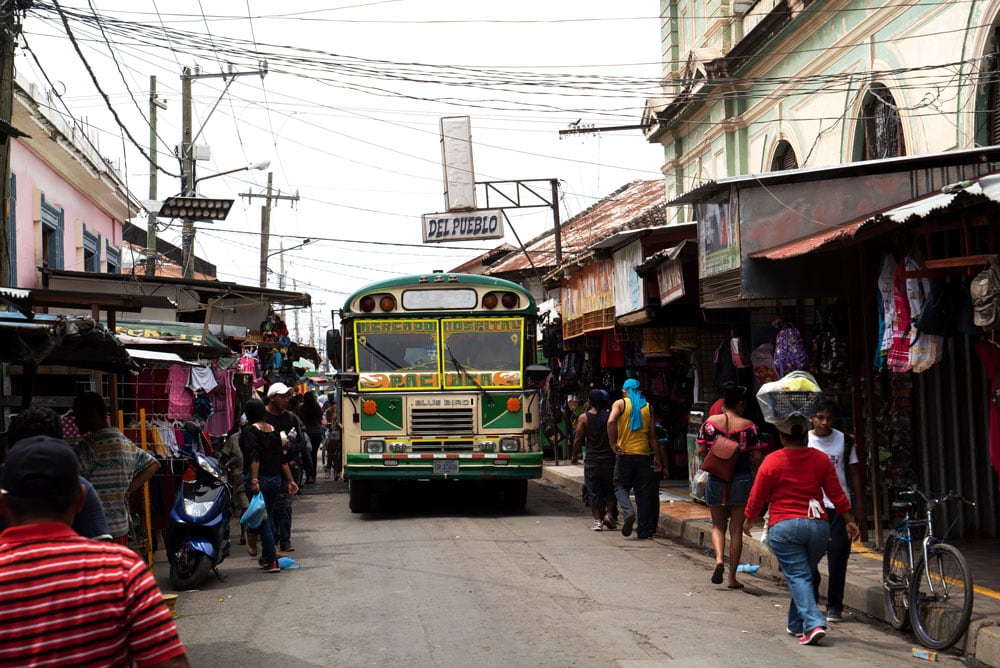 Another important action is to keep your phone hidden. Try not to pull it out and flash it on the street or anywhere in public. Look at your map and directions before you leave your room and don’t wander around staring at your expensive smartphone. It can easily be snatched from your hand by someone passing by.

You’ll notice that Nicaragua, like many developing countries, has different daily-life security measures than most western countries. In cities and larger towns, houses are generally surrounded by high walls, the windows are barred, and a lot of people have some form of security system (usually loud dogs).

Most hotels, banks, shopping centers, and gated communities have around-the-clock security guards posted at entrances and in common areas. This is all for the general wellbeing and safety of locals and tourists alike.

It is a good idea to choose your accommodation wisely. Do your research and choose hotels with around-the-clock security in safe areas. You should also check if you have a safe or lockbox in your room for your valuables.

Online reviews about your accommodation’s security can be a comforting thing to look into before your trip.

Nicaragua has the lowest violent crime rate in Central America with far less violent crime than the more popular tourist destinations of Costa Rica, Belize, Panama, Mexico or Guatemala*. In fact Nicaragua has a violent crime rate considerably lower that the average in urban areas of the USA**. But that doesn’t mean that it is non-existent. Here are a few things to be aware of and tips to stay safe if you are unfortunate enough to fall victim to these crimes while traveling.

Although uncommon, armed robberies have been reported in the country. These generally occur in crime hotspots of larger cities.

If you are attacked by an armed robber, do not resist. It is best to simply hand over your valuables, listen to their demands, and be on your way. You can go to the police and file a report but don’t count on your stolen items being returned.

The best thing would be to make sure you have travel insurance before your trip and that it covers your valuables. Having a police report will support your claim and although the robbery might have brought your spirits down, you are safe and should receive compensation for your insured valuables.

More dangerous theft and armed robberies often occur at night or when people are under the influence of drugs or alcohol. Being a smart and aware traveler can help you avoid these situations.

Travel during the day and avoid walking alone at night with money or valuables on you. It is best to refrain from walking down unlit streets or passing through well-known heavy crime areas. If you are traveling by car in the city or at a stoplight, consider keeping your doors locked and windows up to be safe.

Issues on the Road

Express kidnappings from taxi drivers have also been reported in Nicaragua and although rare, it is important to be aware of the danger. They often drive stolen cars calling themselves taxis in areas around the Managua airport and also in larger cities such as Rivas, Granada, and Masaya. 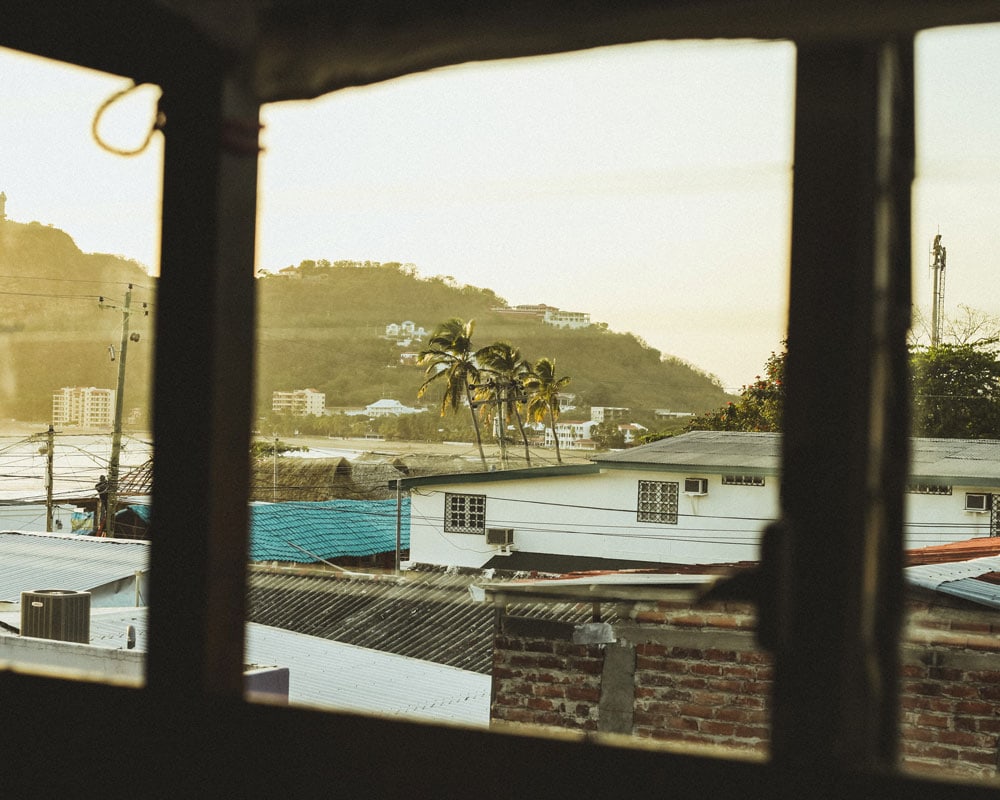 There have been cases of kidnappers threatening the victim, and forcing them to take out cash at various ATMs they are driven to.

Similar robberies have been reported on certain highways such as the Aanagua-Leon highway and the Tipitapa-Masaya highway that connects the international airport to Granada. These are usually fake police inspections that end in bribes or tourists having to go to various ATMs to withdraw cash for the “police”. It is best to avoid these areas at night and always ask for credentials if you are stopped by the police.

Women traveling alone should take special caution, avoid drinking too much, and consider not walking alone (especially at night).

If you are traveling solo as a woman, look for comfortable accommodation in a safe area with hosts that are backed by a solid reputation. This is one of many major tips for solo female travelers to consider on the road.

It is not uncommon to have to pay the police to get out of a minor traffic infraction or for forgetting documentation in your hotel room. It is a good idea to keep a small amount of money with your driver’s license and hide the rest. You don’t want to end up paying more than they ask for after seeing a wad of cash in your wallet.

Every developing country has its own list of scams that locals have conjured up to score some extra cash from tourists. Nicaragua is no different, and although you will most likely not have to deal with this, it’s good to be aware of all possibilities before your trip.

Here is a list of the top scams on tourists.

Overview of tips on staying safe.

Overall if you are smart, attentive, and you follow your traveler’s intuition, you should have an enjoyable experience in the country and remain safe. Here are the top tips on keeping safe while traveling in Nicaragua.

The government has done little to educate its people on the dangers of Coronavirus and has put no restrictive measure down during the entire process. But, the general public is aware of the seriousness of this global pandemic and have taken matters into their own hands for their health and safety.

Most people wear masks in public places, alcohol/sanitizer is graciously handed out when entering large shopping centers, and handwashing stations have been placed in front of smaller shops and in front of some bus stops.

It is up to you to be socially responsible during this global pandemic, to avoid travel as much as possible, wear a mask, wash your hands frequently, and choose your destinations and accommodation based on measures put in place for your health and safety.

Overall, Nicaragua is a generally safe and comfortable country for travel and tourism, and has a greater success rate compared to other countries in Central America. Your safety comes down to having your head on your shoulders, researching the dangers and scams before you go, booking comfortable and safe accommodation away from crime hotpots, and being aware of yourself and surroundings on your Journey.

A Stay at Costa Dulce Retreat

Here at Costa Dulce Retreat, we offer a safe and comfortable living space and would be happy to welcome you to our family at our bungalows overlooking the Pacific Ocean. We provide private transportation with people we know and trust and hold a safe space tucked away at an (almost) private beach 20 minutes south of San Juan del Sur. Learn more about our Yoga & Surf programs or check out our retreat packages. 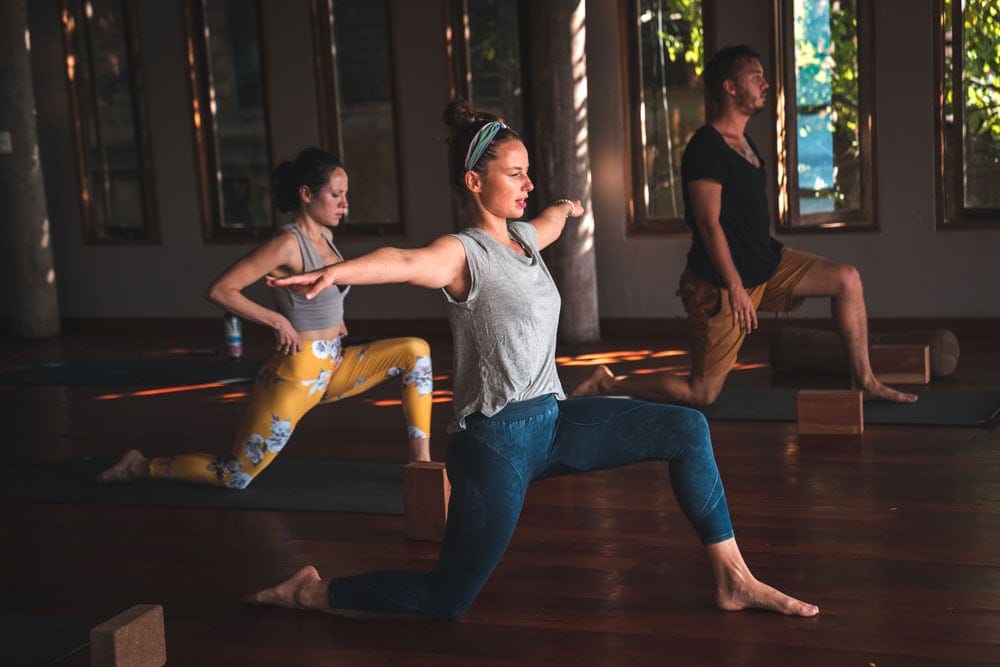 Yoga is a crucial element of our life here at Costa Dulce since it is the foundation of the holistic lifestyle we embody. Yoga and wellness is the key to take care of ourselves, our surroundings, and the people we love. Learn more about our Yoga Program. 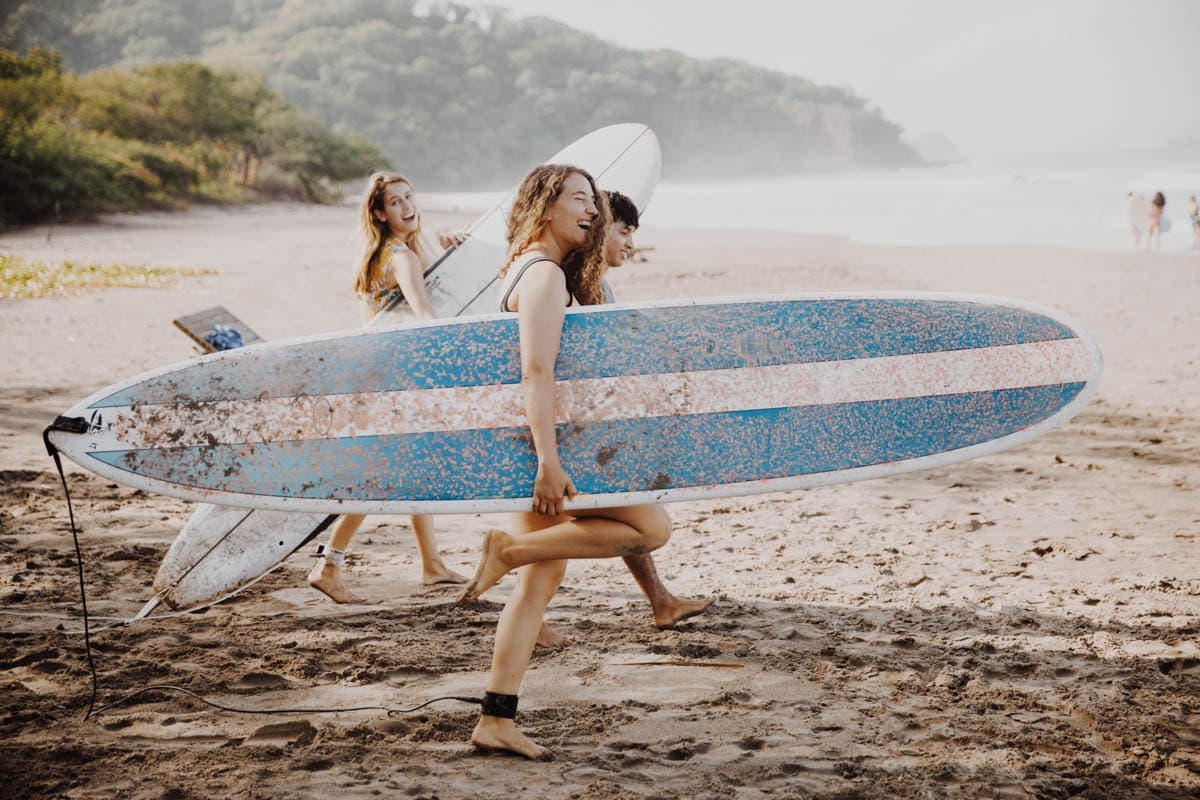 Costa Dulce provides the perfect opportunity to learn how to surf. This is your chance! Nicaragua is a great place to learn but many try and do it at the crowded and more popular surf breaks. Learn more about our Surf Program. 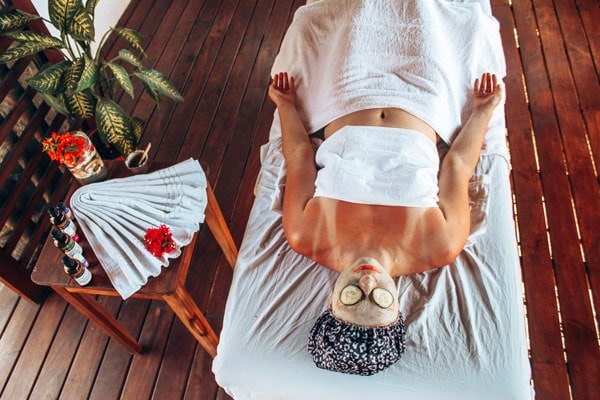 Relax with our Spa Treatment

Treat your body with a relaxing massage, nourish your body/face with a natural mask or energize your body and skin with our signature coffee/ coconut oil scrub, two of Nicaragua’s finest ingredients. Learn more about our Spa services. 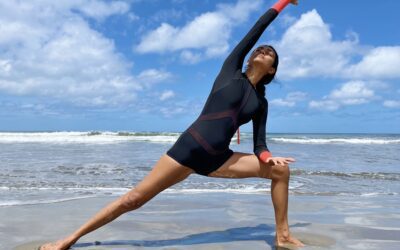 Surf and Yoga: A Match made in Tropical Heaven by Shruti Shah (@flowithshruti)

As a yoga teacher who surfs on occasion, I have realised that being on the surfboard out in the water gives me the same feeling that comes from being on my yoga mat. Surfing allows me to connect with nature and be truly present in the moment, the same way flowing with...

END_OF_DOCUMENT_TOKEN_TO_BE_REPLACED 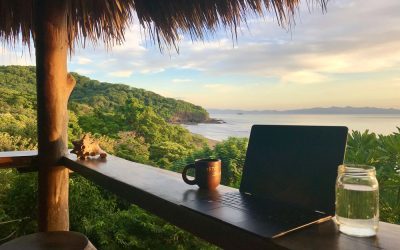 Hola all you wandering souls. You wander the globe in a new found freedom that no generation has ever had before. Interested in living in the land of lakes and volcanoes, Nicaragua? I invite you to live in a dream. A true eco paradise. On a beach nestled in a...

END_OF_DOCUMENT_TOKEN_TO_BE_REPLACED

Elemental Yoga Flow So many of us have the word flow misunderstood. It’s a very yogi word that’s blowing across all of our vocabulary. We say things like I don’t like to plan things out or I am all over the place or just go with the flow. Just because it rhymes...

Sign up for our newsletter, stay in touch with the Costa Dulce family and get updates, news + discounts on your next stay.